For years, the tiny fishing village of Yelapa was the refuge of Bob Dylan, Dennis Hopper, and other cosmic caballero types who gathered in search of lonely beaches, cheap tequila, and readily available hallucinogens. Only fairly recently have more mainstream travelers begun looking to the 2,000-person town as a quiet antidote to the condo complexes and American chain stores closing in on Puerto Vallarta, 20 miles to the north.The speedboat ride between Puerto Vallarta and Yelapa, from one end of Banderas Bay to the other, takes 45 minutes. Behind the beach where boats land is a village of steep paths, randomly laid out. Children skitter about in their underwear, some bearing velvety hibiscus blossoms, which they sell for $1 apiece. The only sounds are the surf crashing and the jaunty rhythms of conjunto music pouring from the squat, pastel houses.

Secluded with no roads or cars

Because the small town is hemmed in between jungle and ocean, Yelapa has no roads or cars. There are very few phones. And there are no street names or maps. But there’s also no need to worry. It’s the kind of place where someone will point you in the right direction. Most locals, whether Mexicans or expats, are on a first-name basis. Take Enrico, the handsome French baker who moved to town last year. (His real name is Henri, but no one here can pronounce it.) Enrico has become a regular sight most mornings, wandering about in his white apron, selling miniature fruit pies for $1. A community bulletin board in the middle of town reads TODAY: BANANA MUFFINS AND CINNAMON ROLLS. There’s no indication of where to find them. The implication is, if you’re in Yelapa, you already know–or someone will be happy to help you.

Your first stop should be the Vortex Café, where the friendly owners seem to know everything about Yelapa, in addition to serving great huevos rancheros ($6.50) and strong Mexican coffee. In fact, Yelapa has a few terrific restaurants. Mimi’s Café, in the center of the village, is low-key and charming, with a handful of umbrellaed tables in a courtyard, and fiery chile rellenos ($6). Given the town’s unpretentious vibe, the sophistication of the menu at La Galería may come as a surprise; Tatiana Moreno Greene concocts Nueva Mexicana dishes such as chicken mole crepes, and plantain cakes filled with goat cheese and peppers ($7). Also unexpected in such a small town: There’s something to do at night. On Wednesday and Saturday evenings, the entire expat community takes to the dance floor at the Yacht Club, where DJs spin a rotating mix of salsa, reggae, and hip-hop. 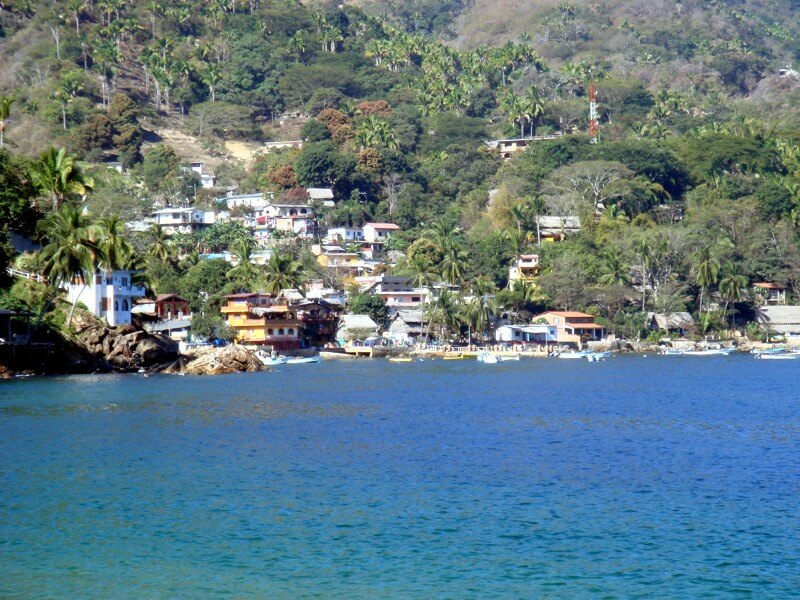 Take a tour to Yelapa Village if you are visiting Puerto Vallarta.

By day, the action, such as it is, centers on the beach. Yelapa’s one large stretch is divided by an inlet. The Big Beach on the northern end is where day-trippers from Puerto Vallarta go to drink overpriced Coronas at a handful of thatched-roof restaurants. Hotel Lagunita, the more affordable of Yelapa’s two bona fide hotels, has whimsical banana-yellow bungalows, morning yoga classes, and a beautifully landscaped pool. Long-term travelers lay their sarongs on the small beach (La Playita), which is far more peaceful, marked only by the Yacht Club.

If you tire of Yelapa’s offerings, ask for Sefarino; he’ll take you on a day trip to Las Marietas islands, where the beaches are even emptier, save for a colony of blue-footed booby seabirds. And Ramon Díaz is your man for a horseback tour of the jungle; he’ll lead the way to wading pools under a waterfall shaded by Jurassic-size ferns.

The village of Yelapa, while charming, is no competitor for Mexico’s colonial towns, with their gracious churches and town squares. And the beaches aren’t exactly world-class. They’re narrow and short, and the sand is somewhat rough. To get a taste of what makes this place so alluring, you have to follow the rocky path that runs along the ocean to La Punta (“The Point”). On your way, you’ll pass Casa Isabel: four lovely, distinctive palapas, and a main house with a well-stocked library and a collection of Huichol Indian art. The owner, Isabel Jordan, is a longtime Yelapa resident and a self-taught expert on Huichol culture.

Further on, other privately owned palapas get more elaborate, almost grand. For $75 and up, you can rent one with two or three stories sporting a view of the ocean that stretches into infinity. There are no concierge services, 300-thread-count sheets, four-star restaurants, or multi-tiered swimming pools–just the sound of waves crashing somewhere in the dark beneath you, and the sense that although not a thing in this raffish little town has been planned, there is something improbably, haphazardly perfect about it.