The Day of the Dead

This holiday in Mexico is celebrated November 2nd.  It is a Mexican festival of pre-Hispanic origin that honors the deceased. On this date the families usually clean and decorate their family members’ tombs with colorful wreaths of roses, sunflowers, and mainly of Cempasúchil, known as the flower of the hundred petals, is believed to attract and guide the souls of the dead. In addition, yellow is the color of death in pre-Hispanic Mexico. 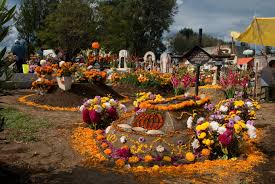 Tombstones and cemeteries are cleaned and adorned in traditional decorations (and altars) usually built by family members or friends of the deceased as part of the Dia de los Muertos celebration.

The Day of the Dead originated in Mexico and has spread throughout Latin America, and also to other regions of the United States. In this tradition, pre-Hispanic culture and Catholic religion are mixed. It is believed that the souls of the children return to visit on November 1, and the souls of the adults return on November 2. 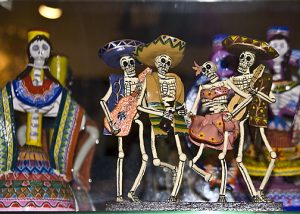 Day of the Dead Souvenirs

• On November 1, the festival begins by decorating the altars with paper and flowers of many colors. If the altar is for a child, toys such as carts, dolls and sweets are placed. 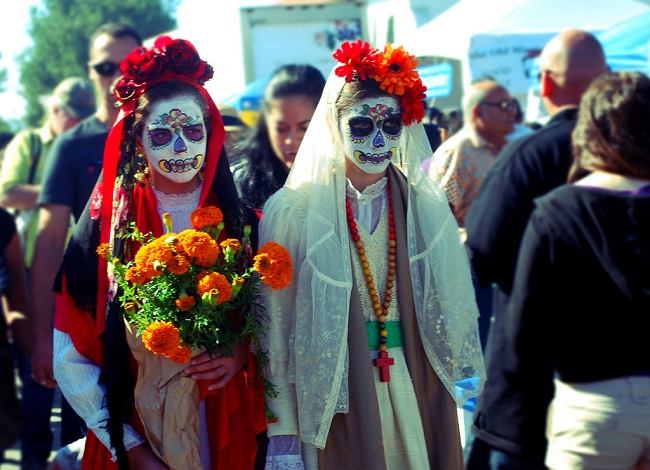 Girls dressed in Day of the Dead costumes

Families spend long hours working on the altars. Many of these altars are considered true works of art, as they reflect the work, dedication and creativity of the people. They are often prepared and displayed inside the houses, on a table covered with a tablecloth placing a photograph of the deceased person. It is decorated with flowers and some memorial items and favorite foods and drinks of the deceased being commemorated. 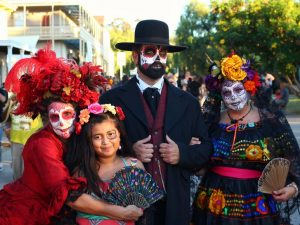 Family Adorned in the traditional costumes

The Day of the Dead is a series of contradictions: • It’s not Halloween, but it includes costumes and lots of sweets. • It is a day for the dead, celebrated by the living. • It is serious as well as fun; remembering loved one’s who are no longer with us and at the same time, celebrating life. • It is traditional but has also become quite commercial.

The origins go back to the time of the natives of Mesoamerica, such as the Aztecs, Mayas, Purepechas, Nahuas and Totonacas. For more than 3,000 years, rituals were held to celebrate the lives of their ancestors. At that time it was common practice to preserve the skulls as trophies. These skulls were shown in the rituals that symbolized death and rebirth. When the Spanish conquerors arrived in the 15th century, they were terrified by these practices. In an attempt to convert Native Americans to Catholicism they adapted this festival by matching the Christian holiday of All Saints Day (November 1), which is after Halloween (October 31). In the end, they combined the pagan customs of Halloween with the Mesoamerican festival, creating what today is known as the “Day of the Dead” celebration.

In Puerto Vallarta and surrounding areas, there are multiple celebrations and festivities all the way from Halloween Oct 31, through Nov 2.  These include parades and costume contests (the Malecon, boardwalk along the ocean) in down town Puerto Vallarta is a sea of colorful costumes, food stands and festivities in the evenings for these 3 days).   Also many of the town squares including the main square in El Centro adjacent to the Church of our Lady of Guadalupe is adorned with alters decorated for prominent figures in the history of the community.  Also, a visit to the local cemeteries (one of the local favorites in the 5 de diciembre neighborhood) is a colorful and enlightening experience to see the procession of families honoring their loved ones.   This week at the end of Oct/ beginning of Nov is a colorful and beautiful time to visit – if you are not here this year we highly recommend planning on a visit next year!